Every Friday night my husband and I go out for dinner. Some may call it ‘date night’ but I prefer to call it ‘the one night I don’t have to cook night’. We were both hankering for a great steak so decided to see if Goodman had a table. We’ve been once before but it was a few years ago so we were looking forward to trying it again.

Funny enough, the Friday night before we were enjoying a Thai feast at Patara which is in the same street so it was a bit like déjà vu. As you approach Goodman, the smell of meat being grilled fills the air and it smells amazing! Although I’m sure vegans, vegetarians and pescatarians would disagree… In fact if you are any of these, then Goodman is not really the place for you.

We were seated in the back of the restaurant and it’s very much like an old American steakhouse – lots of dark wood and low lighting.

Even though the steaks are big, we wanted to sample the starters. I opted for the tempura prawns with avocado and mango with a cajun dressing. My husband had the burrata with Iberican pork sobrasada, olives, tomato and sourdough bread. We chose prosecco to accompany our starters. I have no idea what my husband’s was like (he said it was delicious) as I was too busy devouring my prawns. They were heavenly! The starter was really big though, which of course meant that I was rather full after eating it… and I still had a massive steak to tackle!

Tempura prawns with avocado and mango from Goodman.

We both ordered the 400g rib-eye (unfortunately they don’t do smaller portions, which is a shame because I could only finish half of mine), one portion of hand cut chips and mac ‘n cheese with truffle sauce. I was disappointed mushroom sauce wasn’t an option so opted for classic Béarnaise instead and my husband had pepper sauce. We always have red wine with steak so we went for a glass of Malbec from the Doña Paula Estate. I absolutely love Malbec as it’s full bodied but smooth and it was the perfect accompaniment. 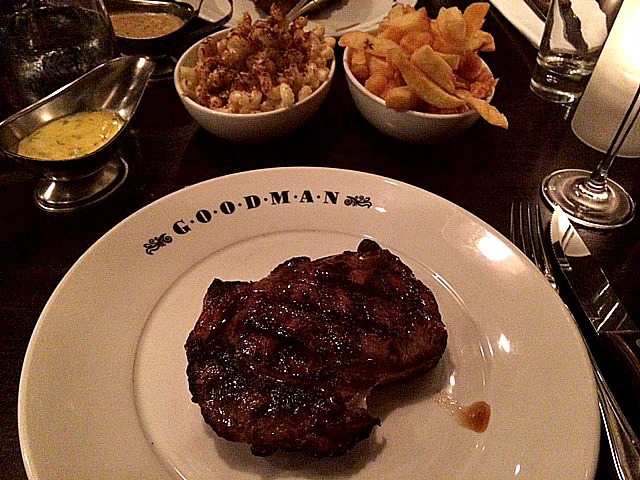 The steak was succulent and well seasoned, which was to be expected as they dry-age their meat on site in order to bring out the optimum flavour. We both ordered ours as medium but could have done with ordering it medium to rare. The hand cut chips were so crispy on the outside but fluffy on the inside – the perfect chip. The mac n’ cheese definitely tasted of truffle but it was a little bit dry. I was expecting it to be oozing cheese sauce but it didn’t, which is a shame.

We had great service – friendly and attentive but not overly fussy. The restaurant has a great ambience too: it’s cosy, intimate and lively without being too loud. We will definitely be returning, however I will probably abstain from ordering so much food!

« What setting yourself a challenge can do for mindfulness

How to start your own business »